This weekend (27 June 2015 to 28 July 2015) was the Felixstowe Book Festival.  The library had arranged for guest speakers and workshops to take place at the Orwell Hotel as well as activities in town for children and at the library.

I decided to take advantage of the event in the hope that my support would encourage them to continue more in future.  The first event on the programme I attended was a talk by Alexandra Pringle and Patricia Borlenghi.  I made a few notes from their discussion on the differences between a large or small publishing house. 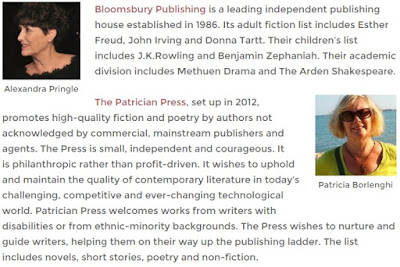 How long is it from contract to publication?

Patricia estimated that this can take about a year.  Alexandra said this is the same for a large publisher from when the contract is signed but that they will take into account when the best time is to publish the book so it may be ready after a year but could be delayed a few months to place the book for sale at the optimum time.  For example, September is not a good time because this is when Christmas books are launched for example celebrity cook book.

Do you need to see the whole novel before offering a contract?

Both publishers said they would offer a contract after seeing a synopsis and some sample chapters if they loved the work.  However, Alexandra pointed out that for a new writer they would want to see the whole thing as they need to get to know you before trusting you like that.  However, non-fiction is often bought on a sample and synopsis.

What is their opinion on other formats i.e. ebooks/audio?

Alexandra originally didn't like ebooks until she got into publishing.  Her business began by only publishing ebooks.  Now she is a huge fan of them and although also prints, she prefers ebooks.  Alexandra is deaf so has no personal experience of audio books but knows people that do enjoy them.  Alexandra didn't feel ebooks are a threat to print as she often goes on to buy a print version of a book that she truly loves.

Patricia knows people who enjoy audio books whilst driving or on the commute.  She enjoys ebooks for how instantly you can receive the information and spoke about a holiday where she'd finished the novel she had packed and then downloaded the next book onto her kindle.  Now she only packs her kindle as she can then take many books but use less space.  Patricia didn't feel that ebooks to be a threat to print and pointed out that they have made hardbacks more desirable as a gift.  When giving a book it is nicer to unwrap something tangible.  Patricia believed people were more likely to buy an authorbiography in print whereas fiction was preferred as an ebook.  She went on to say certain genres tend to sell better on Kindle.

Cost of books and the risk to the industry?

Patricia spoke about how ebooks can protects the territory rights.  She also spoke about how books are actually relatively cheap and their prices have not increased in the past few years.  She gave an example of how the cost of books has come down.  She spoke about how supermarkets are not able to sell books at bargain prices making the pricing of books very competitive.

How important is it that a writer has an agent?

Alexandra purposefully set up her small publishing house to support writers who don't have an agent and welcomes submissions directly from writers.  Once Alexandra receives a manuscript it can take 24 hours for her to read it.  If she takes you on, you can choose to go mainstream after 2 years.

Large publishing houses rely on agents.  Patricia felt they are 'everything' due to the sheer volume they receive.  Bloomsbury no longer have a slush pile.

Both read submissions all day every day.  They only time they have to read anything for their own personal pleasure is on holiday.

Do you meet a writer before a contract?

Patricia would meet the writer and compared their relationship to a marriage.  She would go through the process hand-in-hand and attend events with them and over see the whole process.

Alexandra agreed that the relationship is very intense and feels she is nurturing of her clients.  She will attend launches with them and book events.

What is involved in selling a book?

Patricia pointed out that selling a book can start up to 3 months before a book is even on the market to make the public aware that it is coming.

Patrica pointed out that despite everything they know about the book trade it is still very unpredictable and a lot like betting on the horses.

What about books that get rejected and then make it big?

Alexandra pointed out how Bloomsbury took on Harry Potter when everyone else had turned it down.  She  pointed out that when an agent or publisher turns a write down it doesn't necessarily mean it is no good, it means it's not right for them.  Harry Potter was with the right person to make it excel.

Patricia agreed with this and discussed how personal taste is very important.  The person selling it need to have the drive and excitement to sell it.  Pat spoke about Barry and Sara with her on her own novel as well as meeting J.K.Rolling.  Patricia felt that children's fiction is on the rise as parents are becoming more aware of the importance of encouraging reading.

What genres are doing well?

Alexandra said YA was on the increase.

Patricia opened her doors to Children's fiction in March 2015 (Pudding Press) and has received queries for YA fiction which she currently does not publish.  However, it is something she will be considering for the future - watch this space.

Is the industry dominated by male writers?

There was some talk about an article by Kamila Shamsie that had been posted in the Guardian about how the publishing industry is very male dominated. She proposed that for 2018 the only books published should be those written by women.

Both publishers were area that the industry is male dominated and spoke about their experience of this.

Alexandra was supportive of this movement (only publishing women) as 80% of her submissions are from men and she'd like to actively encourage more women writers.  She reminisced about discovering Virago in the 70s and how it exposed her to the world of women in fiction.

Patricia agreed that something needed to be done to address the inequality balance.  She pointed out that we do have the Orange Price to celebrate women writers.  Many awards are male run and notoriously celebrate male writers.  Patricia can think of a writer she felt deserved to win but didn't even get nominated for her work.  Women writers do sell books but statistically don't win awards.

I really enjoyed the talk.  The way Patricia and Alexandra interacted with each other broke the interview up and made it feel like a talk show.  The knowledge they both share from their length of time in the industry was very insightful.  I hadn't been aware of the gender equality issue.  It was also good to see what is involved from their side of the business like why it takes so long from agreeing a contract to a book arriving on the shelf.  The only problem was the hour went too quickly - I wanted more!